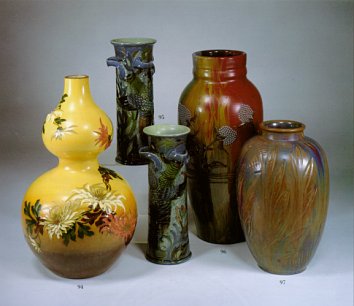 In the course of my family history research I discovered that the Brannans and Brannams were originally one and the same family (i.e. they were spelling variants and the Barnstaple potters eventually adopted the latter from about 1850). I subsequently learnt a lot about the origins of Brannam's pottery which is today located on the Roundswell Industrial Estate, Barnstaple (there are guided tours for visitors as well as a pottery shop and small museum). It is the last remaining industrial pottery in North Devon and has not been under family management since 1979.

The pottery industry in Barnstaple is several centuries old but the founder of Brannam's is considered to be Charles Hubert Brannam. However, he developed the business from that of his father Thomas Backway Brannam. Potted biographies for both can be found below!

Thomas Backway Brannam (or Brannan) was born in Bideford in 1815, the son of Abraham Brannan and Mary Backway. It appears that some of the Backways were potters in Bideford and this could be the reason why Thomas chose that trade. His father Abraham had left Exeter as a child and settled in Bideford as a shoemaker, also following in the footsteps of his own father Abraham and serving as a sergeant in the North Devon militia (his death certificate of 1850 describes him as a pensioner). Thomas served his apprenticeship at Cleavehouses Potteries (Bideford) and by 1837 (the year of his marriage to Jane COOK of Tavistock - they were the first couple in the new civil register for Barnstaple!) Thomas had settled in Barnstaple as a potter, working for John Rendell. Rendell owned two potteries: one at North Walk (which no longer exists) where Thomas' brother James was working in 1841 and one in Litchdon Street where Thomas was working in the same year. James Brannam had married into another family of potters by the name of RICE but he never became a "Master Potter" like his brother. Thomas took over the lease to the North Walk premises in 1848 (the handbill still shows the spelling "Brannan") and in 1853 he also purchased the other pottery in Litchdon Street, where Brannam's remained in business until the recent move to Roundswell Estate in 1990 (see below). Thomas became particularly successful in the production of sgraffito pottery and one of his jugs secured a medal at the Great Exhibition in 1851. Most of the products however were country pottery, as well as bricks and tiles. When Thomas died in 1897, his obituary in the "North Devon Journal" praised his success: "The industry has become a very important one and is still developing rapidly. The growth of the business to which the late Mr Brannam succeeded is a marvellous example of what can be accomplished by originality and well-directed enterprise... The late Mr Brannam, who was a man of retiring disposition, was much respected by the townspeople". Thomas was buried in the churchyard of Holy Trinity, Barnstaple.

Charles Hubert Brannam was initially trained in the business by his father. He left school (Featherstone's Academy for young gentlemen at 1, Union Terrace) at the age of 12 after winning the Art Prize. He was sent to work with his brother-in-law William Britton, a local photographer. He later became a member of the Literary and Scientific Institution where he was influenced by one of the teachers, Alexander Lauder. He received encouragement from a local dignitary Mr William Frederick Rock, especially when he won the Queen's Prize for Drawing in 1870. He then educated himself in the theory and practice of ceramics and sent two vases to Rock who invited him to London where he studied pottery in the museums. By 1879 friends persuaded his father to allow him to start producing his own work. Charles took over the Litchdon Street pottery by 1881 when his father retired and was apparently dissatisfied with the quality of the ware and the general organisation. He was responsible for the development of the art pottery department and the future success of the business. He recruited highly skilled designers, especially William Baron and John Dewdney, but continued to throw the ware himself. In 1885 he received an order from Queen Victoria and this brought good publicity to the pottery. The year after, Charles registered the name "Royal Barum Ware". His father's obituary in 1897 states: "it was left to Mr Brannam's only son to strike out a new line which made Barum Ware famous throughout the world. Mr Charles Brannam, who received all his technical training under his father, early showed quite a genius for the work, and as the result of constant study and persistent experiment he produced a class of ware which is quite unique, both as regards exquisite colour and lustre and artistic finish". Charles was a very versatile man and he won both rowing and pigeon competitions. He continued to take an interest in the pottery until his death in 1937. Small museum inside the present pottery

Charles Hubert Brannam handed the business over to his sons Charles William Brannam and John Woolacott Brannam (Jack) in 1913. The year after, C.H.Brannam and Sons became a limited company. Although some writers consider that "the pottery never reached the same heights" after Charles Hubert, his descendants brought out some beautiful new glazes (including a radio-active orange!) and had the difficult task of steering the business through the second world war with the difficulty of obtaining coal supplies. Jack's son Peter, after serving in the army during the war, carried out considerable modernisation in the post-war period. When Peter retired in 1979 (died in 1988) he sold the business to Candy Tiles of Newton Abbot, who ten years later found that the old Litchdon Street premises were too cramped. The only solution was to move to its present "green field" site on the Roundswell Industrial Estate but the old pottery building was preserved and is now a health centre. Brannam's has thus ensured the survival of pottery making in North Devon, an industry which is at least 700 years old.

For further information, see books on Barnstaple in my Devon book list, especially "A Family Business" 1982 by the late Peter Brannam and Mrs Edgeler's book "The Art Potters of Barnstaple" 1990 (both now out of print). For those interested in the earlier history of the industry I would recommend Dr Alison Grant's work "North Devon Pottery: The Seventeenth Century" 1983. For the history of the Litchdon Street premises the North Devon Record Office holds a comprehensive report by Clark and Horton, commissioned for the District Council in 1988. An interesting article on James Brannam, brother of Thomas Backway Brannam, was written by my distant cousin Patrick Brannam for the newsletter of "The Northern Ceramic Society" (no. 100) December 1995. Most other works on the pottery concern Charles Hubert Brannam and the art pottery period. An exhibition was held in 1991 at Liberty's in London and the catalogue, including some historical background (to which I made a small contribution), may still be available.

Many books on Devon also contain references to Brannam's pottery, especially as it has remained something of a tourist attraction. See "Devon" by Brian Chugg (Batsford 1980) on pages 150-2 (with a few factual mistakes) and "The North Devon Story", by Eric Delderfield 1953, as well as the David and Charles 1971 reprint of Strong's "Industries of North Devon" 1889, Article 4 on "Barum Ware Pottery".