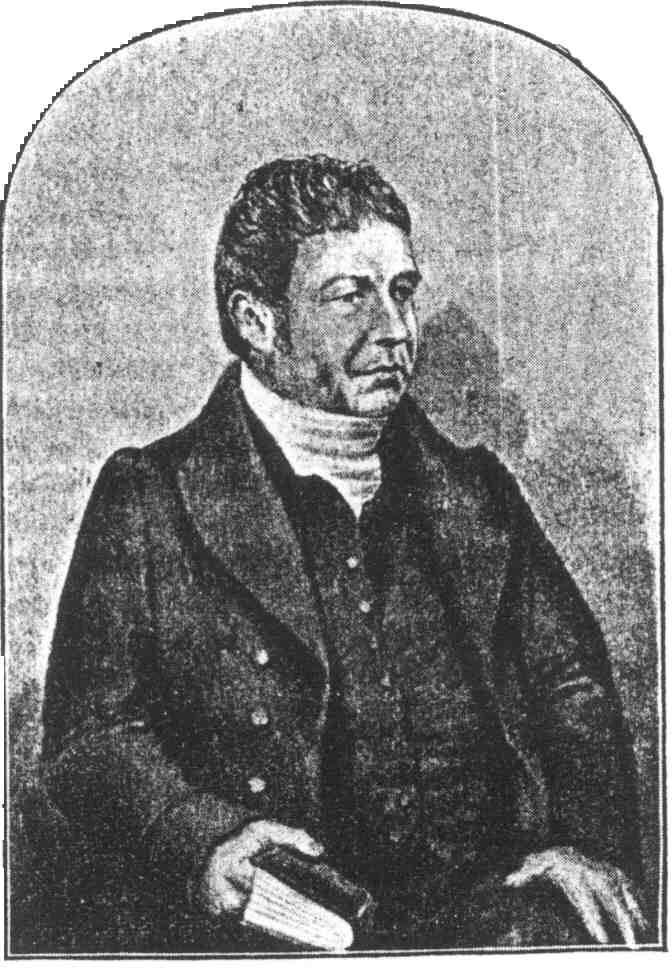 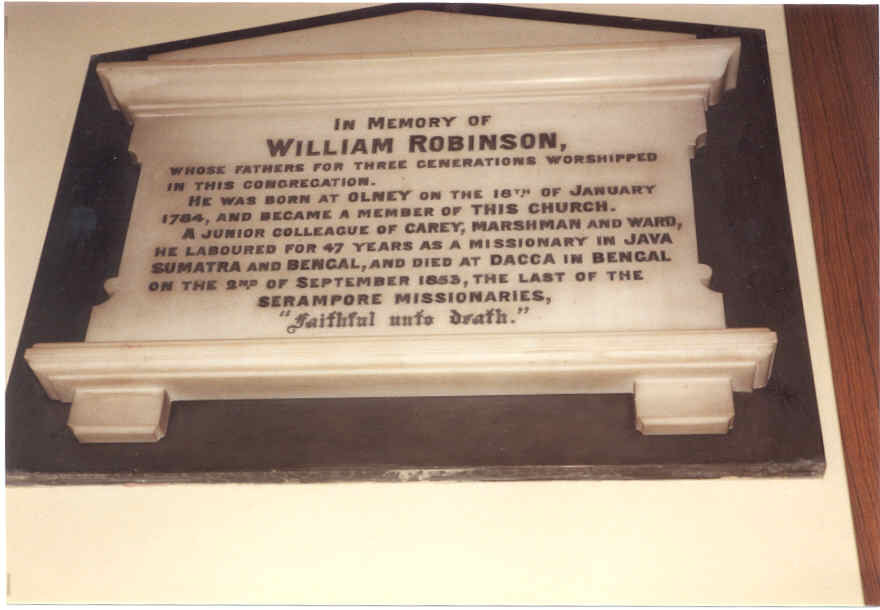 William Robinson was born in Olney on 18 Jan. 1784, son of John Robinson and Sarah née Barnett or Barnard. His memorial plaque on the wall of the Baptist church records that his family had worshipped there for three generations. The tombstone of his parents can still be seen in the churchyard (moved to the wall on the left-hand side). 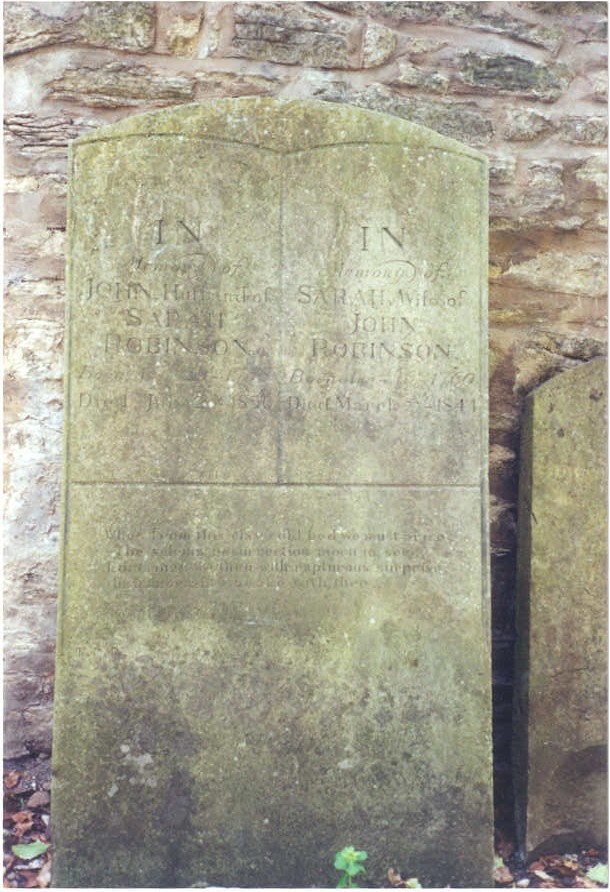 Gravestone of William's parents, John and Sarah Robinson, in the Baptist churchyard 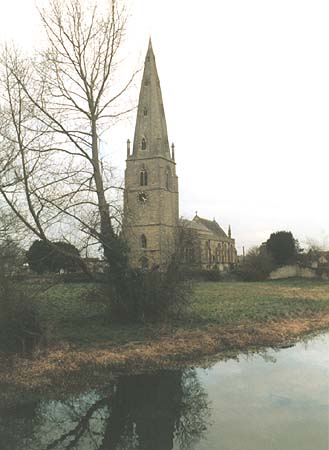 Robinson, like Carey, was a shoemaker by profession. He was inspired by hearing John Chamberlain (also a missionary to India) preach at the Olney chapel and to quote Ernest Payne:"One March day [1802], after a specially memorable sermon, the congregation went down to the banks of the slowly-flowing Ouse, and there a number of them confessed their faith in Christ by baptism. William Robinson was among them, and also Elizabeth Walker, who later became his wife". In 1804, at the age of 20, William offered himself to the Committee of the Baptist Missionary Society and was accepted for service abroad. William first studied under John Sutcliff in Olney and at the Bristol College from June 1804 to July 1805. On 12 March 1806 he was ordained as a missionary in Oxford and he was married shortly afterwards. The Olney Baptist Minute Book shows that on 30 March 1806 he and his wife were "dismissed to Baptist Church Serampore in Bengal - W. Carey, Pastor". They left London on the ship "Benjamin Franklin" together with the missionary James Chater (also from Olney), who was later to be sent to Burma and then Ceylon. The BMS archives contain a letter he wrote to John Sutcliff from the ship as it was delayed heading down the Thames. He starts with "We have now lain off Greenwich about four days..." and ends with "My wife, brother and sister Chater join with me in love to you and also our good Captain. Please remember me to Mrs Sutcliff and to all the students".

On arrival in India (Serampore, near Calcutta), Robinson and Chater were immediately ordered to return home by the governor-general Barlow, as the Baptists had fallen out of favour with the local administration, but the deportation orders were later suspended. Robinson was soon sent 100 miles to the mission at Katwa, to begin the study of Bengali. After a couple of years it was decided that Robinson should be entrusted with a mission further afield and so in 1808 he paid his first visit to Bhutan with William Carey junior. In preparation for that mission he had his first experience of Bible translation. As S. Pearce Carey was to write:"With William Robinson's Bengali proving exceptionally accurate, and his preaching fresh and original, Serampore judged him specially fitted for the mastery of tongues and the work of pioneering. Their one anxiety concerned his temper; for as Ward put it, he was capable at times of "shaking down the whole mission-house", though none could be blind to his fervid devotion. They urged him to make entry into Bhutan, but he found the country in the absorption and confusion of war; so the way of the mission was blocked". He made several trips to the borders of Bhutan between 1808 and 1811 but without success. During one of the trips his wife died and on the last occasion he was attacked by a band of fifty or sixty robbers who killed his servants and left him wounded. Back in Serampore, it appears that William did not always agree with the senior missionaries and could not accept their hierarchy. Fuller refers to "his democratic notions of I know not what liberty and equality" that were "utterly unsuitable for a Christian missionary"!

In 1812, after remarrying, William was entrusted with the mission in Java, which had been lost by the Dutch during the Napoleonic Wars. He sailed from Calcutta on 6 March 1813 and reached Batavia (now Jakarta, Indonesia) on 1 May. His status there was not initially secure and as S. Pearce Carey states:"Robinson, who had gone to Java on the strength of an earlier permit, was ruthlessly pursued and ordered to England; but he was protected and retained by Lieutenant-Governor Stamford Raffles, an ardent Christian and a personal friend of Serampore, and as keen a naturalist as Carey".However, by 1813, he had already gathered a baptized church of twenty. He learnt Dutch and Malay, translating the Gospel of Matthew into Low Malay in 1816. He suffered from ill-health but it was written about him in 1815:"He has suffered much, but God has graciously restored him, so that he preaches six times a week; once in English to the 78th regiment, and five times in Malay at four different places".

However, William's ambition to learn Javanese and to preach in the interior of the island does not appear to have been so successful - he was nevertheless the first Christian missionary to make an attempt. When the Dutch took over Java again, William Robinson's activities became more restricted. After being refused permission to move further inland for health reasons, he decided to leave Java and in 1821 he moved to Bencoolen on the neighbouring island of Sumatra, to join Nathaniel Ward (nephew of William Ward). William was again supported by Raffles, who was now the Governor of this British enclave. He continued his study of Malay and even wrote a book "An attempt to elucidate the principles of Malayan orthography", published in 1823 and dedicated to Raffles. After Bencoolen was ceded to the Dutch, Robinson returned to India in 1825 and was appointed to a pastorate in Calcutta (Lall Bazaar) where he remained for 13 years. To quote S. Pearce Carey again, the Serampore missionaries "judged it also to be good that they were now joined by William Robinson. After years of faithful service in Java and Sumatra he had returned, and had been called to the pastorate of Lall Bazaar. In the Schism and in the Disruption he had taken his own independent line, and at length published in Britain a defence of the seniors. Now he identified himself with Serampore and became one of Carey's most valued coadjutors".

In 1829, Carey praised the work of Robinson in a district to the south of Calcutta. Robinson also taught at Serampore College from 1832 to 1837. Carey died in June 1834 and Robinson was one of the executors of his will. But in 1838 some difficulties arose respecting the deeds of Lall Bazaar Church and he resigned, moving to Dacca (Dhaka, now the capital of Bangladesh). He stayed there until his death in 1853. Ernest Payne wrote:"Those who knew him in his last years told of his humility, his diligent study of the Bible, his unadorned directness of speech". A monument over his grave proudly stated that he was a native of Olney, Buckinghamshire. 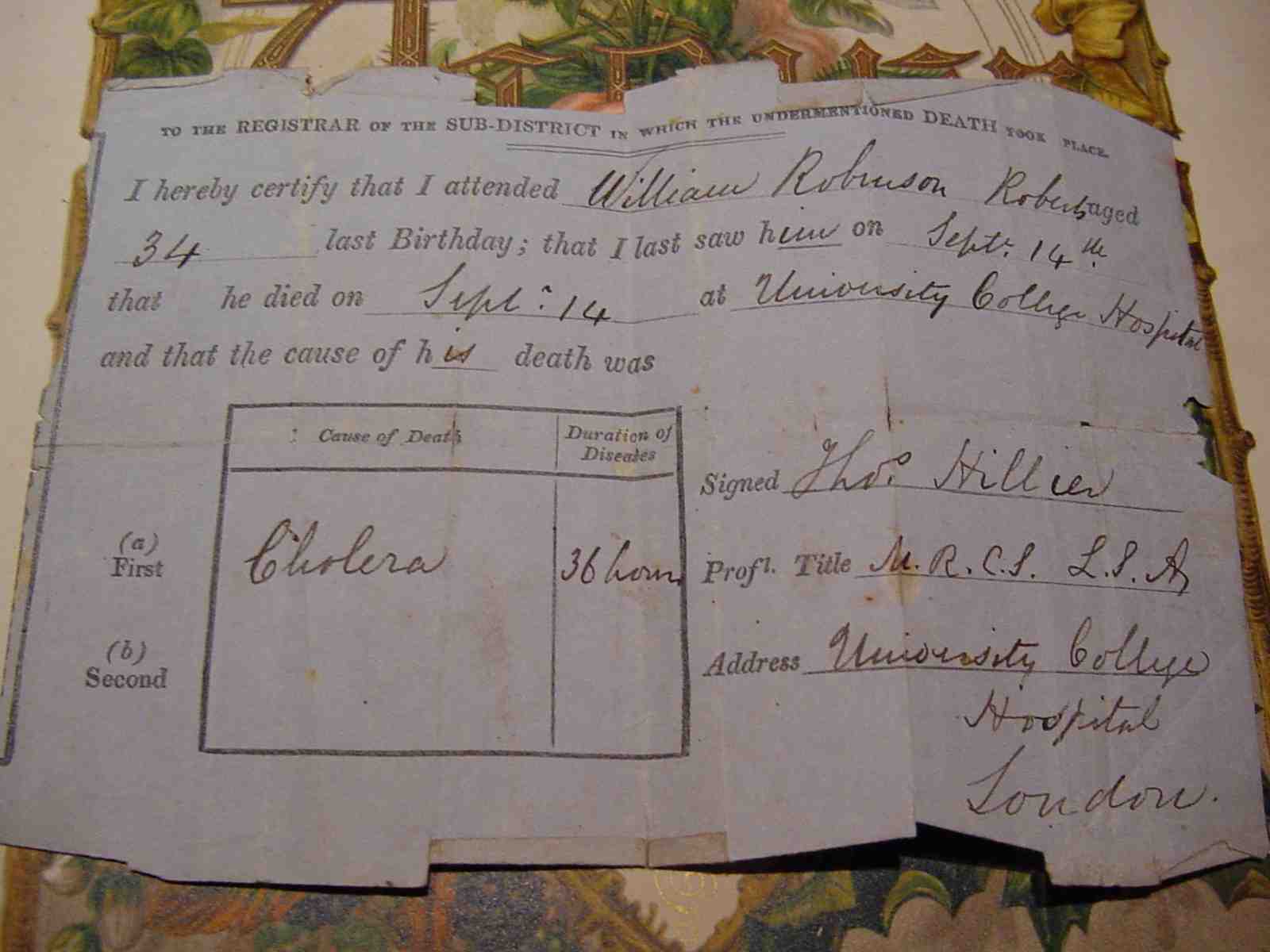 The site contains a large number of book extracts, some mentioning William Robinson, although he is not covered nearly enough compared to the other missionaries! The most interesting extracts are listed below:


The latter page, chapter 12 of the biography starts off with the arrival of Chater and Robinson. One thing that puzzles me is that, according to this writer, they arrived on the ship "Criterion". However according to the first extract from Staughton (above), the arrived on the "Benjamin Franklin" which is consistent with the letter I found in the BMS archives. Carey himself sailed on the "Criterion" when he first arrived in India.