The aim of this page is to provide information about the parish of St Sidwell's, Exeter, which was home to my ancestors in the eighteenth century. I have contributed it to the GENUKI Devon web site: there are a few more recent additions here, whilst the Genuki pages contain additional (and useful) information about Exeter in general. 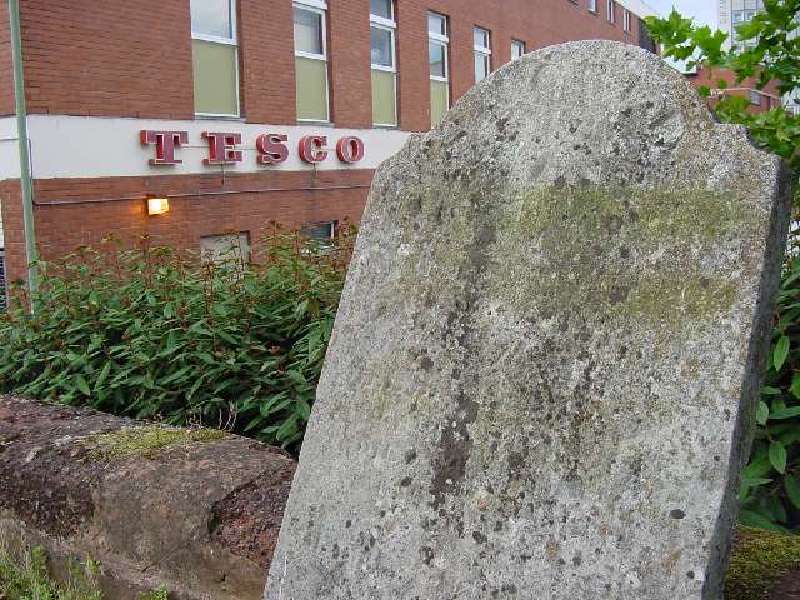 Today, if you walk north-east along Exeter High Street away from the city centre, you will find yourself in St Sidwell's parish without realising it. It is hard to imagine that it was once a bustling suburb in its own right, outside the city walls. Over the centuries the City of Exeter often tried to control the suburb, partly because of its rich water supply, but St Sidwell's resisted, claiming its own feudal court and Guildhall. It developed mainly in the seventeenth and eighteenth centuries, with a population of labourers, and soon also became Exeter's poorest parish. The parish church was originally built at least 1,200 years ago! However, if you go there today you'll find that far from being so ancient, the present church is only some 50 years old. Only a few old gravestones remain to bear witness to the history of the site...

The parish is named after Saint Sativola, Exeter's patron saint, about whom there are various possible traditions. The most probable one is that she was a Roman or Romano-Briton who lived towards the end of the fifth century, sister of St Pol de Leon (492-573). Even though she has been traditionally associated with a holy well, this is not considered an explanation for the name. The position of the church can probably be explained by the Roman tradition of placing cemeteries outside the walls of their cities, with shrines and monuments erected at the side of major roads. In 1222 it was appointed to be one of the parish churches of Exeter, though without the walls. The church was rebuilt in Gothic style at the beginning of the 15th century and consecrated by Bishop Edmund de Lacy in 1437. It has had a colourful history over the centuries, bearing the brunt of every attack against Exeter since, being outside the walls, it stood unprotected. At the time of the Prayer Book Rebellion and great siege of Exeter in 1549 it was in the hands of the insurgents and became a prison. Amongst the inmates was the father of Sir Walter Raleigh, imprisoned in the tower "on account of his reformed opinions". During the Civil War it was again used as a prison and a store for explosives. In the nineteenth century the church attracted nationwide attention with the Surplice Riots of 1845: the use of the surplice instead of the preaching gown in the pulpit led to local protest and scandal! The parish registers are well-preserved in the Devon Record Office and date back to 1569. One of the more famous people to be christened in the church was Sabine Baring-Gould, clergyman, author and hymn-writer (including "Onward Christian Soldiers"), on 4 March 1834.

In "Devon and its People" Hoskins quotes the diary of Joseph Farington concerning the atmosphere at St Sidwell's church one Sunday morning in October 1810: The curate was nearly eighty years old, and read the service in so feeble a voice that he could hardly be heard. The organist had stayed away without giving any notice, and there was no singing... The congregation were as bad as the parson. Farington noticed many people sitting during the prayers "with as much cold indifference as their posture could indicate".

In addition to the above, the Church must have been in a poor state of repair at that time, for in 1812 there was an Act for repairing the Parish Church of Saint Sidwell - a copy of which I have recently purchased from a dealer advertising on the web!

A complete description of the church, as it stood in 1850, can be found below. After being much damaged over the centuries, and rebuilt in various stages, Billing's Directory of 1857 goes so far as to say that "St Sidwell's church is a handsome pile of building possessing the finest specimen of architecture of all the city churches".

The following description of the church and parish is taken from White's Directory of Devonshire 1850:

"St. Sidwell's Church stands without the Walls, in the north-eastern part of the city, and from its populous parish the new district parish of St James, has been lately taken...(St James had been separated from St Sidwell's parish in 1838). The original church was a very ancient fabric, dedicated to St. Sativola, or Sidwell, a virgin, who is said to have been beheaded with a scythe, about the year 740, and to have been buried here. It was rebuilt in 1812 and '13, at the cost of more than 2200 pounds, except the tower, which was repaired and surmounted by a handsome octagonal spire, in 1823, at the cost of about 500 pounds. It is now a beautiful edifice in the pointed style, and in its lofty tower are eight musical bells, hung in 1768. The interior consists of a chancel, and a nave, with two side aisles, neatly pewed and having three large galleries. It will seat more than a thousand hearers, and the nave and aisles are separated by the clustered columns of the original church, supporting six arches, studded with rosettes. Each capital is divided into eight compartments, four containing angels supporting shields, and the other four small figures of St Sidwell. The east window is enriched with a beautiful representation of the Ascension, in painted glass. The pulpit is richly carved, and supported by flying arches rising from four buttresses. The font is octagonal, and large enough for immersion. The organ is a fine toned instrument, and in the church are several handsome monuments. St Sidwell's parish was anciently parcel of the parish of Heavitree, though it has always formed part of the county of the city of Exeter. It includes Hill's Court, which was for many generations the seat of the Hill family, but is now a street with many neat houses. It also comprises all the handsome suburbs extending eastward from St. Sidwell street to the Workhouse, Polesloe Park, etc. In the church register are records of great ravages of the plague, in 1625, and an entry of the burial of Richard Wilkins, who was executed for witchcraft in 1610. The benefice is a perpetual curacy, valued in 1831 at 252 pounds. It is in the patronage of the Vicar of Heavitree, and incumbency of the Rev. Fras. Courtenay, M.A."

St Sidwell's since the war

On the 2nd May 1942 the heaviest raid of the war hit Exeter, and the parish of St Sidwell received the full force of the attack. Some 800 houses were destroyed in the parish (out of a total of 1,400 in Exeter) and the centre of the parish was devastated. The Church was completely burnt out and the tower was declared unsafe. The Rector, Rev Narracott, risked his life to rescue the church registers and silver from the vestry under the teetering masonry. The church was rebuilt in 1957-8 with a structure supporting one bell behind the east end of the church - the war-damage compensation was not enough for a tower. The rebuilding of the parish as a whole has been much criticised for replacing residential streets with other types of building: the Civic Centre, the main bus and coach station, department stores, offices, etc. St Sidwell's once had a lively parochial life but today its whole character has changed.

In the seventeenth century St Sidwell's was a parish of farms, market gardens and orchards, with a population of smallholders and labourers who mostly lived in rows of thatched cottages outside the East Gate. A valuable guide to the population and wealth of Exeter is provided by the Hearth Tax rolls of 1671-2. They show that St Sidwell's had the highest number of households (356) with the majority (223) containing just one hearth - too poor to pay the Hearth Tax. This can be compared with St Petrock's parish, where two thirds of the families occupied houses with three hearths or more. By that time St Sidwell's had become the most populous parish, overtaking the second biggest parish (St Mary Major) in the middle of that century. Hoskins uses marriage records to show that St Sidwell's roughly doubled in population between 1570-79 and 1670-79, with the average number of marriages per annum rising from 13.8 to 27.2. At the time of the Hearth Tax the population was reckoned to be rather more than 1,700. Hoskins comments "The majority of the inhabitants must have consisted of a labouring population dependent upon the energy, activity and accumulated wealth of other men" (from Industry, Trade and People in Exeter 1688-1800). Newton states "By the 1690s its population was finding a major source of employment in the developing brickfields" (Eighteenth Century Exeter). It also became home to the labourers in the flourishing wool and serge industries. Being predominantly working-class there was much poverty and associated problems such as disease (in 1695 due to a "great fever" there were 145 burials in contrast to the average of 42.5 of the 4 preceeding years) and food riots (in 1766 magistrates and constables were stoned in the parish). With the decline of the industries, it appears that the labourers of St Sidwell's, by the end of the eighteenth century, had begun to find alternative employment in what would today be described as service industries: carriers, victuallers, coach-makers, harness-makers, grooms, postboys, personal servants, etc. There were still a large number of weavers however in 1803 at the time of the Militia List (see bibliography), another very important guide to the inhabitants of Exeter before the 1841 census. In 1803 there were a total of 436 men between the ages of 17 and 55, including 40 weavers. Other professions related to the declining wool and serge industries can also still be found: 3 Sergemakers, 3 Woolcombers, 1 Woolsorter. In 1801 the parish had a population of 2,707 with 403 inhabited houses. The low thatched cottages of the weavers were gradually replaced by the brick houses of the middle-classes that began to settle in the parish - St Sidwell's was becoming part of Exeter's commuter belt with the demand for comfortable houses in more rural surroundings, but remaining within easy reach of shops and social attractions. The number of inhabited houses rose to 1,070 in 1831 (up 138 per cent from 1801, compared with 50 per cent for the city as a whole). The population was 6,602 in 1831 and 9,663 in 1851 (including 317 in the Exeter workhouse).

Exeter, with references to St Sidwell's

with separate registers for St James from 1842 and the christening register for the Wesleyan Chapel in Sidwell Street 1841-1865.

The IGI contains christenings and marriages up to 1837.

Other records in the DRO include deeds for Episcopal Estates in St Sidwell's 1632-1822.

The few remaining churchyard inscriptions are included in the card index of the Devon Family History Society (applications only). I even discovered one of my ancestors among them!

A book entitled "Exeter Churches" by B. Creswell (1908) in the Westcountry Studies Library (Exeter) contains several pages on St Sidwell's including transcriptions of memorial tablets and brasses inside the pre-war church.

St Sidwell's is covered in booklet number 16 (HO107/1868) of the 1851 census surname indexes for Devon, available from the Devon Family History Society. The same information for the whole of Devon is now available on CD-ROM from the LDS (but with numerous errors - beware!)